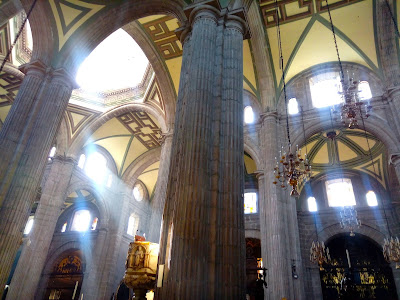 The cathedral and its side chapel represent a synthesis of art in New Spain. After penetrating its imposing sun-bathed baroque and neoclassical facade, the visitor enters the ethereal half-light of this hallowed shrine, with its five separate naves, its side chapels, and its sacred religious icons. The religious ceremonies are performed against the interest of hundred of visitors but, with a little luck, it may be possible to hear the strains of one of the cathedral's monumental organs. The City's soft clay subsoil, subject to continuous movement over the years, has propitiated the gradual sinking of many building such as the cathedral, and sophisticated restoration works, partially visible, have prevented its collapse.

The transformation of the Aztec city started when Spaniards destroyed the pagan temples in 1521: the outdoor ceremonies were then celebrated in open chapels, the holy Eucharist took the place of human sacrifices, green feathers were replaced by golden thread cloths and ancient rain and wind gods took the form of Catholic saints posing on golden altar pieces.
Turquoise and pedernal stone were buried to give life to gold monstrances, and the sound of native drums to imported organs. An ancient pagan skull platform (Tzompantli), located in site was substituted by ossuaries and graves beneath the monument. Today, both words mingle just in front of the Cathedral by the means of conchero dances and chaman rites.
Mexico City Cathedral evolved through three centuries, gathering artistic stiles, devotions, lavish ceremonies and encoded bell rings, that marked the pace of time in the Viceroyalty’s capital. For this reason, the monument is not only an outstanding architectural piece, but most of all a social symbol that reveals the power of the Catholic hierarchy, a refuge for sorrowed souls, the origin of riots but also the grave or our ancestors and the centre of a nation.

Exterior harmony
This monumental structure which today dominates Mexico's main square called Zocalo, is not the same as that which initially replaced the Templo Mayor in 1572. The Archbishop Pedro Moya de Contreras laid the first stone which, after 42 symbolic years, was inaugurated by the Viceroy Duke of Alburquerque and was later re-dedicated in 1667 by the Viceroy Mancera.
Mexico City cathedral had the privilege of introducing new architectural styles that subsequently flourished throughout New Spain. Classic style evolved into Neoclassic and envelops the baroque facades without detracting from it in any way. Much of this is owed to architect Manuel Tolsa, who added the final touches to the project in 1813 with a balustrade and by enlarging the central dome.

The exquisite interior
Crossing the threshold framed by the magnificent main doors carved in 1659 leads the visitor into a more subtle world, geared towards uplifting the soul with a spirituality that permeates the senses: magnificent fluted columns which soar upward and return to earth in a display of infinite motion akin to the sounds produced by the monumental organs, exquisitely carved the wooden benches crowned by a marble lectern, golden galleries of the organs and the resplendent altar pieces.
The vestry is probably the heart of the building's religious ceremonies. Priest preparing for mass are wrapped in a pictorial heaven painted by Cristobal de Villalpando and Juan Correa, who were devoted to proof in images that the Catholic institutions were the ones called to save the world, assisted by endless number of angels and directed by Archangel Saint Michael. It is difficult not to feel the bliss of movement, color and light coming from the lofty regions of this extraordinary room, a wonder of New Spain.
On one side of the cathedral the adjoining side chapel "Sagrario" can be visited. The sober interior provides a sharp contrast to its capricious exterior facade, designed to be the model of Mexican Baroque art by Lorenzo Rodriguez in 1749. The special light filtering into the naves is due to the modern stained glass, designed by Mathias Goeritz in 1968. Today, there is a difference of almost five feet between the levels of the opposing walls of the cathedral's huge structure, which stoically resists the vagaries of the urban landscape.