Echoes of Paris in Mexico City 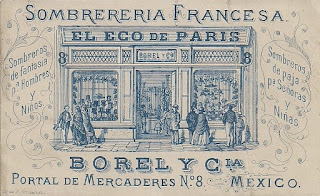 Between 1875 and 1914 merchants of French origin in Mexico City experienced a boom era. In Europe, France lived the consolidation of its hegemony from the proclamation of the Second Republic and French culture became the model of the elites of Latin American societies. While France was competing with Great Britain, Austria and Prussia, French fabrics and clothing were enthusiastically received in Mexico and the constant arrival of French immigrants transformed the social life of the capital. But the beginning of the First World War marked the end of French hegemony in Mexico, the Mexican Revolution, and the infamous American attack to Veracruz led to the end of the Belle Époque.

The French presence in Mexico was due to the emigration of individuals who maintained their identity with a discrete inbreeding. The consolidation of their capitals and the extension of their commercial networks allowed the diffusion of their culture among local elites. Some immigrants responded to the call of the Mexican authorities, who needed to populate the rural areas with Europeans. A first group arrived in Veracruz area, establishing themselves in ​​San Rafael and Coatzacoalcos. But most settled in the cities, highlighting a group of Alsatian Jews and the contingent of Barcelonnettes. 1

France and Mexican politics
To compensate for the external threats, the Mexican president Porfirio Diaz regime paid his debts promptly and sought to make Europe a moderating force against the United States influence, with France as its center. From the governmental point of view, French emigrants would bring prosperity to the Mexican nation. What in a few decades this became true with investments in banks, railways, mines and textile industries. The latter were linked to numerous businesses and produced their own cashmere wool fabrics. Trading these products benefited from the expansion of communication and transportation, hard policies over the masses of workers, the integration of the national market, and the reduction of the external trade deficit. The telegraphic network was of paramount importance for the improvement of business.2

The struggle for the hegemony of nations over Mexico dates back to the French presence during the Mexican Second Empire (1862-1867), which benefited certain groups. The Alsatians were placed among the elite of society, around the Societe Financière pour l'industrie au Mexique, which competed with the Rothschild organization and German interests in Mexico. Porfirio Diaz foresaw the need to import capital for infrastructure works and to give the French entrepreneurs the opportunity to manage the National Bank of Mexico, an issuing bank, government lender and finance private enterprises. The role of the Alsatians is very unique, because it is a group of Jewish origin, modernized, urban and individualistic. Their religious manifestations were very discreet because they knew that there was anti-Semitism and the French identity was a more prestigious feature than their religious background. 3

The economic liberalism was favorable to the immigration of groups that had been denied entry to Mexico, especially the case of French Jews such as Eduard Noetzlin, who was a representative of the Societé Financière, and who later directed the National Bank from Mexico. Although the railroads were the domain of Americans and British, Robert Simon and his partner Ernest Cassel participated in the Central Railroad and were shareholders of the Western Bank, based in Mazatlan. Noetzlin was a key figure in the financial agreements between France and Mexico. After the establishment of the National Bank, he returned to France to head the organization's office in Paris, leaving in Mexico several partners, all of them French Jews. 4

Other shareholders of the National Bank of Mexico were the brothers Jules, Joseph and Henri Tron, who started modest clothing business in Mexico City. Since the 1860s these shops were located in the central “Portal de Flores” whose owner was Mr. Gassier, who was associated with other merchants such as Reynaud, Tron and Leautaud. This company was called "Tron y Cía." It was decided then to create a large warehouse in 1873. This building was located in the street of San Bernardo and was designed by architects Ignacio and Lorenzo de la Hidalga. Its innovative steel structure, adjacent to the viceregal palaces, came to the public to be called “Iron Palace”. With its lavish opening in 1891, it was linked since then to the architecture and life of Mexico City. Towards 1893 the stores established the policy of fixed prices and changed status to an anonymous society, expanded the building and inaugurated a taylor’s workshop within the premises. Despite various vicissitudes (the building's fire in 1911) and the revolutionary movement, in 1921 the new building was inaugurated on the street on February 5, with Art Nouveau decoration by architect Paul Dubois and extended again in 1925. 5

The French merchants in Mexico City took advantage of the central location of their businesses in the heart of the “city of palaces”. At the junction of Plateros and Espíritu Santo streets a filigree work was built that looks more like a French toy store: “La Esmeralda”. This jewelry was founded in 1864 by David Zivy and then bequeathed to the Bloch family. The building was adorned with Parisian attics, a beautiful clock and stuccos in the interiors. The Zivy family also managed “La Parisiense” glassware and the Iturbide Hotel restaurant, with furniture produced by them. At the end of San Francisco Street, the Jokey Club was established, whose president was Ives Limantour and his vocalist the French banker Louis Lavie. Since 1904, in the comfortable armchairs of the club they could read the newspaper published in French by Max Athénosy, "L'Écho français". 6

The state monopoly of the manufacture and sale of cigarettes during the colonial era passed into the hands of businessmen during the convulsions of the nineteenth century. One of them was the French Ernest Pugibet (1855-1915). Pugibet met in Cuba the cultivation of tobacco and the techniques of manufacturing cigars. In 1884 he established in Mexico the small cigar factory “El Buen Tono”, whose production he personally distributed. Later he introduced modern machines, reorganized the plant and constituted a society with contributions of Mexican and French capitalists. Pugibet was remarkable innovator in the advertising of his products and used means such as balloons and an airship, being one of the first to sponsor comics. Together with Felipe Suberbié and other investors, he acquired Cervecería Moctezuma. He participated in the founding of the Mexican National Company of Dynamite and Explosives, was a shareholder and advisor of the National Bank of Mexico, the textile factory San Ildefonso, the Monte Alto Railroad and shareholder of  “Palacio de Hierro”. He donated the temple of Our Lady of Guadalupe in the Barrio de San Juan for this factory workers, designed by engineer Miguel Ángel de Quevedo in 1912. 7

French enterprises set up a new era of business in Mexico City and spread the model over the country with successful managerial models which soon permeated over local businessmen. Today it is possible to observe some of the mentioned buildings, which added a touch of French style to the Mexican Capital.